Did you know Vatican dress code is a thing?

I learnt that the hard way during my maiden trip to Rome in the Summer of 2017.

It was a bleisure trip- business infused with sightseeing and relaxation. It thrilled me to finally be heading to what was previously the center of the Roman Empire, which extended from Europe, North Africa and Southwest Asia . Known for its stunning architecture, with the Colleseum, Pantheon, and Trevi Fountain as the main attractions, a visit to Rome never disappoints.

I suspect though that what really fueled my excitement about this trip was the possibility of spotting the Pope at the Vatican City. 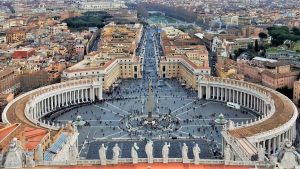 I arrived in Rome on a Friday evening for a Monday morning business engagement. I was deeply excited and needed a plan for the weekend.

There are many sites in Rome- wonderful palaces, thousand-year-old churches, grand Romantic ruins, opulent monuments, ornate statues and graceful fountains. Rome has an immensely rich historical heritage and cosmopolitan atmosphere, making it one of Europe’s and the world’s most visited, famous, influential and beautiful capitals. As one of the fashion capitals of the world. the city is a shopping haven.

So many sights and things to do in 2 days. I had to prioritise!

Vatican City—territory of the Holy See- was my top pick. Not only did I stand a chance of spotting the Pope but also encounter the art work of the greatest of the Italian Renaissance artists- Michaelangelo.

From my hotel room, that Saturday morning, I identified Greenline Tour Company, which runs Vatican City tours. The tour would take up all day and would include three key sites at the Vatican City: Vatican Museums, Sistine Chapel, and St. Peter’s Basilica in that order.

At the main entrance, of the Vatican Museums, I first noticed what a big crowd had turned up for the tours that morning. Everyone was waiting in long queues for admission. Admission procedure included a security check as well as a dress code check.

I stood in my queue in panic. I didn’t know if I was within the dress code policy. In a flash of a second my mind raced to the reality that now stood before me. My chance of spotting the Pope getting slimmer.

I would then notice a poster on the wall outlining the dress policy. The Vatican’s dress code means one must cover their knees, arms, shoulders and back. Therefore, tops, shorts, sleeveless dresses are not suitable.

Unfortunately, on that Saturday morning, my appearance did not fit that description. My arms and shoulders were bare. There were security officers patrolling that space and plucking out people like me. I knew I needed to think and act fast; my heart racing and my eyes busy searching for a solution. I then closed my eyes and prayed for a miracle. Afterall, I was standing only a few meters away from St Peter’s Throne – a relic conserved in St. Peter’s Basilica in Vatican City. Perhaps St Peter could intercede for me? How would a catholic-raised-and-educated girl who had travelled all the way from a dusty village in Central Kenya explain missing the Pope by a whisker due to dress code related disqualification?

And then, something gave- right there in my handbag. It was a scarf I had tucked into the handbag that morning. I reached in, pulled it out and quickly threw it over my shoulders. My look transformed to one appropriate for the Vatican. With a shawl over my shoulders, a positive nod from the security team, and a ticket in my hands, I stepped into the Vatican museum and exhaled.

The tour was such an amazing experience. The Sistine Chapel was one of my biggest highlights –adorned with some of the most astonishing paintings in the world by Michelangelo. Breathtaking.

St Peter’s Basilica- the ultimate symbol of the Vatican- is however where I had uncountable jaw-dropping moments. I am at a loss for words to express my experience at St Peter’s Basilica. Consecrated on 18th November 1626, 120 years after the first stone was laid, it is a stunning building, filled with fabulous art and architecture. For about an hour, I paced here and there inside the Basilica, insatiably feeding my eyes and mind with the intense visual range of symbols, ornaments, and patterns. It was just spectacular.

Did I spot the Pope on that Saturday?

To see the Pope in Rome, you have three options. Among the options is visiting St peter’s Square on a Sunday morning for the Angelus Papal address at noon.

On Sunday, I was up early and headed straight for the magnificent St Peter’s Square. After attending Sunday morning mass in Latin at the Basilica, I hang around the crowded Square- which actually isn’t square but oval in shape. At exactly noon, the Pope appeared at his window in the papal apartments to the right of the square for the Angelus and Papal address. The excitement that filled the air in that moment is indescribable. I closed my eyes for a prayer of gratitude.

About the Author
Rosemary Mburu is a social justice activist with a passion for people and communities. She is the founder of Nuggets of Life, a storytelling platform offering a deep exploration of the human spirit as taught to us by ordinary people in the streets of life around the world.

Nuggets of Life from Mt Kilimanjaro